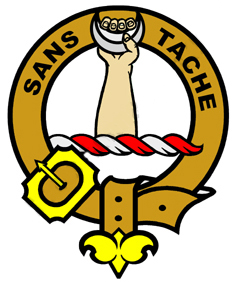 Napier Clan Crest: A dexter arm, in hand a crescent.

Napier Clan History: This family has its origins in the ancient earldom of Lennox, and therefore it descends from the Royal families of Scotland and Ireland. However, George F. Black in his The Surnames of Scotland suggests that the surname derived from the “naperer”, a member of the Royal Household in charge of linen and tablecloths for great occasions.

Be that as it may, in 1290, John Naper received a Charter for the quarter-land at Kylemethew (or Kilmahew) in Dunbartonshire from Malcolm, Earl of Lennox, and rendered homage, along with Matheu le Naper, to Edward I of England in 1296.

Alexander Napier of Merchiston was a successful merchant who purchased land and, in 1437, 1456 and 1469, served as Lord Provost of Edinburgh.  James II made him Comptroller of the Royal Household in 1440, and Vice Admiral of Scotland.  His son John, who had married a daughter of the Earl of Lennox, was killed at the Battle of Sauchieburn in 1488.  Both Alexander, his heir, and his grandson, died at the Battle of Flodden in 1513.

John Napier, 8th Laird of Merchiston, invented the mathematical system of logarithms. He turned his great mind to creating war machines that would foil any invasion attempt by Catholic Spain. His inventions included giant mirrors that would set enemy ships ablaze and blueprints for recognisable tanks and submarines. His son, Archibald, 9th Laird of Merchiston, was among those who accompanied James VI to England in 1603. He became Lord Justice Clerk of Scotland, and, in 1627 was created a Baronet of Nova Scotia, later becoming Lord Napier of Merchiston. He was married to Lady Margaret Graham, daughter of the 4th Earl of Montrose, and was therefore brother-in-law of the celebrated Marquis of Montrose.

The Napiers supported Charles I in the Civil War and, when Scotland was annexed to the Commonwealth, the 2nd Lord Napier was forced into exile. After the Restoration, Archibald, 3rd Lord Napier successfully petitioned the Crown for a new Patent to allow the succession to pass through the female line.

The 10th Lord Napier was a gifted diplomat and friend of Jefferson Davis who became President of the Confederated States of America. He served as Ambassador to Russia and Prussia, and as acting Viceroy of India in 1872. That same year he was created Baron Ettrick of Ettrick in the UK peerage. On his retirement to Scotland, he became Chairman of the Crofters Commission.

Robert Napier  was born at Columbo, Ceylon in 1810, and entered the Bengal Engineers in 1826.  Having distinguished himself at the Siege of Lucknow, he was awarded a CBE.  In 1870, he was appointed Commander-in-Chief in India, and was subsequently made a Field Marshal and appointed Governor of Gibralter.  He was created Baron Napier of Magdala.

Macvey Napier (1776-1847) was born in Glasgow and edited the supplement to the 5th and 7th editions of the Encyclopaedia Britannica. The Conqueror of Scinde, Major-General Sir Charles Napier (1782-1853) was a grandson of the 5th Lord Napier and took part in the West India Campaign. His commemoration statue stands in Trafalgar Square, London. Admiral Sir Charles Napier (1786-1860) commanded the Portuguese Fleet and was made Count Cape St Vincent. He captured Sidon in the Syrian War of 1840. In 1854, he fought against Russia in the Baltic. David Napier (1790-1869) invented the steeple engine and, in 1820, established steam communication between Greenock and Belfast. Sir William Napier (1785-1860) served in the Napoleonic Wars and wrote History of the War in the Pyrenees, and History of the Conquest of Scinde. Robert Napier (1791-1876) was born in Dunbarton and became a shipbuilder, notably for the P&O Company. Mark Napier (1798-1879) wrote The Law of Prescription, and biographical works on the Napiers, the Marquis of Montrose, and Graham of Claverhouse.

Places of Interest: Merchiston Castle, Edinburgh is a 15th century tower house which, in 1962, was restored and used as the nucleus for Napier College.  Lauriston Castle, Edinburgh. This incorporates a 16th century tower built by Sir Archibald Napier of Merchiston. Kilmahew Castle, nr. Cardross, Argyll and Bute. Ruined castle on lands held by the Napiers for over 500 years. Old Ballikinrain, Balfron, Stirlingshire. Country house owned by the Napier family from the late 1600's until 1862.