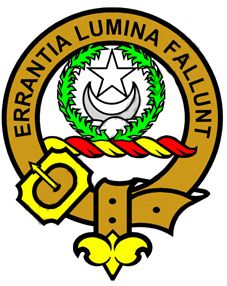 Kinnaird Crest: Between the horns of a crescent, a molet, or, out of a cloud, all within two branches of palm, in orle, Proper.

This surname originates from the lands of Kinnaird in the district of Gowrie, which were conferred on Radulphus Rufus by William the Lion in a Royal Charter of 1170. In 1296, Rauf de Kynaird rendered homage to Edward I of England, and his grandson, Sir Richard de Kinnaird, has a Charter to his lands in Perthshire confirmed by the Earl of Carrick.

It was the 8th Lord Kinnaird who built Rossie Priory, in the Carse of Gowrie, the 9th Lord (1807-1878), was Master of Buckhounds to HM Queen Victoria. He was created Lord Rossie of Rossie in the UK peerage in 1831. In 1860, he was created Baron Kinnaird of Rossie.  The 10th Lord Kinnaird was baptised Arthur Wellesley, after his godfather, the Duke of Wellington.  The 11th Lord Kinnaird, an all round athlete and evangelical churchman, was Lord High Commissioner to the General Assembly of the Church of Scotland from 1907 to 1909, as was his son, the 12th Lord Kinnaird, in 1936 and 1937. The 13th Lord Kinnaird, who served with the Black Watch Regiment, died in 1997 without male heir.

During the 16th and 17th centuries, several Kinnairds emigrated to Ireland, and thereafter to the USA.

Places of Interest: Kinnaird Castle, west of Inchture, was originally built in the mid-12th century. Most of the castle had to be rebuilt in 1450 and, having fallen into serious disrepair again, was externally renovated in 1855. The estate was sold by John Kinnaird of that Ilk, 15th Laird of Kinnaird in the 17th century, passing to the Livingstones, Colvilles and Thrieplands. The castle remains in private ownership. Rossie Priory at Inchture, Perthshire, built for the 8th Lord Kinnaird, is now a hotel.