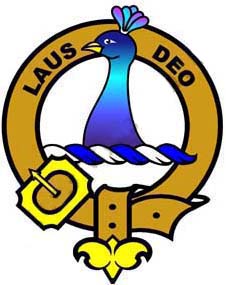 The surname of Arbuthnot(t) is of Celtic origin and is unique in its description of a geographical location in the Mearns district of the North-East of Scotland. The original spelling, Aber-bothenoth, refers to the "Aber" or confluence of the smaller stream, the Bothenoth, with those of the larger River Bervie. The site for this place name is a narrow peninsula of land in the Bervie Valley, three miles upstream from the sea, where the valley is joined on its north side by the steep glen cut out by the smaller stream of the Bothenoth ("Burn of Healing").

The peninsula of Arbuthnott has a narrow neck no more than 100 yards wide between the steep slope down to the stream bed on its northern side, and the equally steep, but longer, slope down the river valley to the south. Historically, this provided a brilliantly defensive position and it is here that the castle and the home of the Arbuthnott family has been situated for over 800 years.

Around 1175, Osbert Olifard ( a surname which subsequently became Oliphant), was given these lands by William the Lion. His successor, Walter de Olifard, went on a Crusade and presumably died abroad. However, before doing so he made over his lands to one Hugh of Swinton, from Berwickshire, who in all probability had married into the family. It was Hugh's son Duncan who adopted the surname of Arbuthnott, and it has been used by his successors ever since.

In the first half of the fifteenth century, Hugh Arbuthnott of that Ilk was implicated in the murder of John Melville of Glenbervie, Sheriff of the Mearns, who had become unpopular with the Duke of Albany, then Regent of Scotland.  Summoned to meet with the lairds of Arbuthnott, Halkerton and Pitarrow, the unsuspecting Sheriff was tossed into a cauldron of boiling water to be transformed into soup. The perpetrators of the crime were later pardoned.

The Arbuthnott title came from adherence to Charles I, who created Sir Robert Arbuthnott  of that Ilk a Viscount in 1641. The family supported the Stuart Cause, and at Arbuthnott House, an 18th century enlargement of a 17th century dwelling, can be seen portraits of exiled Stuart family members, probably gifted to the 5th Viscount for his loyalty. The garden of Arbuthnott House is open to the public between April and August.

Alexander Arbuthnot (1538-83) was the first post-Reformation Principal of King's College, Aberdeen and, in 1577, was Moderator of the General Assembly of the Church of Scotland.  John Arbuthnot (1667-1735), a physician, was born in Kincardineshire and, settling in London,  became a close friend of the writers Jonathan Swift and Alexander Pope. In 1705, he was appointed physician to Queen Anne. He wrote the History of John Bull (1712).

Places of Interest: Arbuthnott House, home to 34 generations of the Arbutnott family over the last 900 years, is situated eight miles south west of Stonehaven in Kincardineshire and, until it was built on to in the 16th century consisted of a 13th century tower. A major restoration was completed in 2014 and the house is again welcoming visitors from around the world. Balnamoon, nr. Brechin, Angus. 15th-century castle with later mansion house. Home of the Carnegy-Arbuthnott family since 1745. Castle of Fiddes, nr. Stonehaven, Kincardineshire. 16th-century castle held by the Arbuthnotts in the mid-1600's. Kaim of Mathers Castle, nr. St. Cyrus, Kincardineshire. Little remains of this 15th-century cliff-top castle which sits on lands owned by the Arbuthnotts in the 1800's. Whistleberry Castle, Kinneff, Kincardineshire. Remains of medieval castle, perched on cliff-tops above the North Sea, built on land held by the Arbuthnotts.

Surname distribution in Scotland: The Arbuthnott surname occurs most often in Angus (Forfarshire), Aberdeenshire ( including the historical county of Kincardineshire and part of Banffshire) and Perth and Kinross (Perthshire and Kinross-shire).