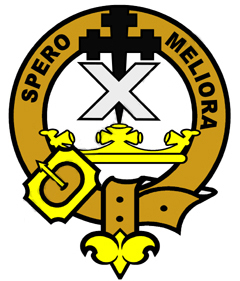 Moffat Clan History: At some time during the 10th century, Andlaw, alias Allan, came to Scotland from Norway, and the youngest of his granddaughters married William de Monte, considered to be the ancestor of the Movats or Moffats. Prior to 1124, when the second Robert de Brus acquired the Lordship of Annanadale from David I, the Moffats were ancient vassels of the Annans, the old lords of Annandale, which then comprised the greater part of Dumfriesshire.

Although both Robert de Muffet and Thomas Moffet rendered homage to Edward I of England in 1296, as did virtually every other landholder in Scotland, the Moffats were granted four Charters of land at Westerkirk by Robert I. Thomas Moffat received the lands of Glencrosh and Swegill, and Adam Moffat, possibly his brother or nephew, received the lands of Kinock and Crooks, which remained in the hands of the family until 1608.

In 1342, the Moffats received the feu of the Grandtoun or Granton from Sir John Douglas, who owned the feudal superiority. This was held by the family until 1628, when it was humiliatingly sold to the Johnstones to cover debts.

Over the centuries, the Moffats were included among the great Riding Clans of the Borders, notably feuding with the Johnstones. The climax to this situation came in 1557 when the Robert Moffat was murdered and the building in which his followers had gathered was burned to the ground. Thereafter, the Chiefship of the name of Moffat remained dormant for 420 years. In 1983, Francis Moffat, a successful Dumfriesshire farmer and retired Convenor of Dumfries District Council, was recognised as Hereditary Clan Chief by the Lord Lyon King of Arms. His daughter succeeded to the title on his death in 1992.

A large number of Moffats fled to Ulster at the time of the National Covenant. Some became mercenaries and travelled further afield. In the USA, a Moffat was killed at the Battle of the Alamo; another drowned in the Kentucky River. Yet another built the longest railway tunnel through the Rocky Mountains.

In Germany, the name Moffat is spelled Muffat. Although this family's origin is unclear, it is suggested that they descend from a John Moffat who held a Charter of Privileges from James V in 1528 within the boundaries of Flanders, Zealand and Brabant.

August Gottlieb Muffat (1690-1770) taught music to the Empress Marie Therese. Dr Robert Moffat (1795-1883) was born at Ormiston in East Lothian. He went to Southern Africa with London Missionary Society and reached Rhodesia, now Zimbabwe. Graham Moffat (1866-1951) was born in Glasgow and portrayed Scottish life and characters in a series of plays – Bunty Pulls the Strings, and Susie Tangles the Strings. Alastair Moffat is a former director of the Edinburgh Festival Fringe and a prominent Scottish television broadcaster who has written a series of books on Scotland, including Arthur and the Lost Kingdoms and The Borders. In 1995, he launched the Borders Book Festival at Kelso.

Surname distribution in Scotland: The Moffat name is most commonly found in Dumfries and Galloway (Dumfriesshire, Kirkcudbrightshire and Wigtownshire), the Scottish Borders (Berwickshire, Peeblesshire, Roxburghshire and Selkirkshire) Edinburgh City and the Lothians (Linlithgowshire, Edinburghshire and Haddingtonshire), Lanarkshire and the Highland council area (an amalgamation of the historic counties of Caithness, Inverness-shire, Nairnshire, Ross and Cromarty, Sutherland and small areas of Argyllshire and Morayshire).

Places of Interest: The Moffat Museum, Churchgate, Moffat, contains much useful local history. The Devil's Beef Tub, or Corrie of Annan, is a large hollow in the Moffat Hills where Moffat reivers hid their cattle.