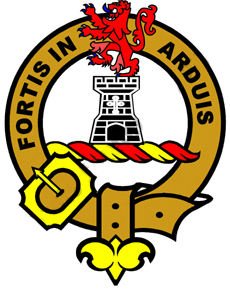 Middleton Clan Crest: Out of a tower, embattled, Sable, a lion, rampant.

Middleton Clan History: The surname originates from the lands of Middleton in the Parish of Laurencekirk in Kincardineshire and, for three generations, the family who lived here carried the designation of Middleton of that Ilk. An Umphridus de Midilton witnessed a grant of lands in 1221, and Humfrey de Middiltone rendered homage to Edward I of England in 1296, with Robert de Middleton taken a hostage when Edward invaded Scotland that same year.

In 1642, John Middleton, who had served in France with Sir John Hepburn of Athelstaneford's Regiment d'Hebron in France, returned to Scotland to oppose Charles I's religious reforms. He became a General and in 1645 took part in the defeat of the Marquis of Montrose at the Battle of Philiphaugh. When Charles instructed Montrose to disband his forces, it was Middleton who negotiated the terms. However, he did not support the King being handed over to the English Parliamentary faction and, having attempted to rescue him, joined the Royalist Cause. Captured at the Battle of Worcester, he was tried for treason but escaped to France.  At the restoration of Charles II, he was created Earl of Middleton and appointed Lord High Commissioner to the Scottish Parliament. He was latterly made Governor of Tangier.

The 2nd Earl of Middleton served as Ambassador to Vienna, and Secretary of State for Scotland.
He neither supported James VII, nor the Glorious Revolution of 1688. As a consequence of this, he was imprisoned but, like his father, escaped to France. The 3rd Earl died in 1746, and the title has since remained dormant.

Sir Thomas Middleton of Rosefarm (1863-1943) was an eminent agriculturalist and became Director General of Food Production during World War One. From the 1940s until the 1960s, Marjorie Middleton ran an immensely successful ballet school in Edinburgh.

Surname distribution in Scotland: The Middleton name is most commonly found in Aberdeen City, Aberdeenshire (includes all of Kincardineshire and part of Banffshire), Moray (includes large parts of historic Banffshire), Angus (Forfarshire) and the Shetland Islands.

Places of Interest: Middleton, the Parish in Kincardineshire, which gave its name to the Middleton earldom, has been re-named Fettercairn.