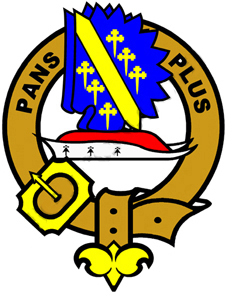 Mar Clan Crest: On a chapeau Gules furred Ermine, two wings, each of ten pen feathers, erected and addorsed, both blazoned as in the arms.

Mar Clan History: To a great extent this surname is of territorial origin from the district of Mar in Aberdeenshire, an ancient province from which its rulers took the title Mormaer (Earl) of Mar. In a charter of 1114, the Mormaer of Mar is named as Rothri or Ruadri and, as such, the earldom of Mar is acknowledged as the most ancient in Scotland.

William, 5th Earl of Mar, was Great Chamberlain of Scotland and Regent of Scotland in 1264. His son, Donald, was a witness to the marriage contract between Alexander III's daughter, Princess Margaret of Scotland, and King Eric of Norway.

After the death of Alexander III, and that of his granddaughter, the Maid of Norway, the earls of Mar backed the Bruce claim to the Scottish Throne, no doubt influenced by the fact that Donald's daughter Isabel, was Robert the Bruce's first wife, and Donald's son was married to Bruce's sister Christian. The 8th Earl of Mar was held hostage in England until exchanged for the Earl of Hertford in 1332.

Thomas, 9th Earl of Mar  died without a male heir and the title passed to his sister Margaret, and then to his niece, Isabel, who married a son of Alexander Stewart, Wolf of Badenoch.  Thereafter, the Mar earldom was annexed by James II, passing to James Stewart, natural half-brother of Mary Queen of Scots. In 1565, Queen Mary reinstated Sir John Erskine as 18th Earl of Mar. The 19th Earl was Lord Treasurer of Scotland from 1616 until 1630. The 20th Earl was appointed Governor of Edinburgh Castle; the 21st Earl, Chancellor of Scotland.

Although not supporters of the National Covenant, the Mar's supported Charles I, and fought at the Battle of Kilsyth in 1645. As a consequence, their estates were confiscated and not returned to the family until the Restoration of Charles II in 1660.

The 22nd Earl raised the Royal Scots Fusiliers regiment in 1679, and his son, 23rd Earl, was created Duke of Mar by the exiled Old Pretender in 1715. After the Jacobite Uprising, all of his estates and titles were forfeited.

In 1824, the earldom was restored by to the Duke's grandson John, by an Act of parliament which acknowledged him as 24th Earl of Mar.  However, some confusion occurred when, in 1875, Walter Erskine, 12th Earl of Kellie, Chief of the Erskines, also claimed the earldom of Mar, and the House of Lords ruled that there should henceforth be two earldoms of the same name. However, the Chiefship of Mar is currently held by the 30th Countess of Mar, in her own right.

Charles Kerr Marr (1885-1919) was born at Troon. He left £3330,000 for education in Troon, Ayrshire, and Marr College was opened in 1935. Andrew Marr, the television broadcaster and political commentator, was born in Glasgow in 1959. In 2007, he launched the television series Andrew Marr's History of Modern Britain.

Places of Interest: Alloa Tower, in Clackmannanshire, which dates from the 14th century, is one of Scotland's largest tower houses. It is administered by the National Trust for Scotland. Mar's Wark, Stirling. This comprises the remains of a town house built by the Regent Mar in 1570. Cambuskenneth Abbey, north east of Stirling, was erected in 1604 as a Lordship for John, 19th Earl of Mar. Braemar Castle, Aberdeenshire, was built in 1628 by John, 19th Earl of Mar (1562-1634) to dominate his vassals, the Farquharsons of Invercauld. Braemar castle was restored by the community of Braemar and re-opened to the public in 2008.