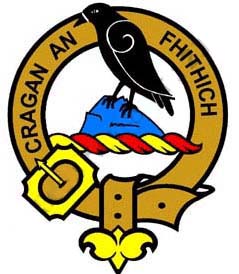 MacDonnell of Glengarry Clan Crest: A raven perched on a rock.

MacDonnell of Glengarry Clan Motto: Cragan An Fhithich (The rock of the raven).

History of Clan MacDonell of Glengarry:
The Glengarry branch of Clan Donald originates from the marriage of Ranald, son of John of Islay, and Amy Macruari, heiress to a vast inheritance of lands in the Outer Hebrides. Their second son Donald founded the Glengarry line.

In 1539, Alexander, Chief of Glengarry, received a Charter from James V for lands at Glengarry and Morar, half the lands of Lochalsh, Lochcarron and Lochbroom. Donald, 8th of Glengarry, lived to be over 100, during which time Glengarry was erected into a Free Barony.  His grandson Aeneas, who became 9th Chief, fought with the Marquis of Montrose against the Marquis of Argyll at the Battle of Inverlochy in 1645. Aeneas also fought for the Royalist Cause against Oliver Cromwell at the Battle of Worcester in 1651, and as a consequence, the Glengarry estates were forfeited by the Commonwealth. At the Restoration, the estates were returned and he was created Lord Macdonell and Aros, although when he died without an heir, the title became extinct.

The Glengarry MacDonells supported the Stuart Cause during the Jacobite Uprisings of 1715 and 1745, although Alasdair Ruadh, 13th Chief, was captured and imprisoned in London and later spied for the Government, becoming known as 'Pickle the Spy.'  Alexander MacDonnell (1762-1840) became a Roman Catholic priest and helped to raise the Glengarry Fencibles. He was created Vicar Apostolic of Upper Canada in 1819 and Bishop of Kingston (Canada) in 1826. General Sir James Macdonell (1781-1857), brother of the 14th Chief, fought under the Duke of Wellington at the Battle of Waterloo.

Surname distribution in Scotland: The MacDonnell surname is most commonly found in Highland (an amalgamation of the historic counties of Caithness, Inverness-shire, Nairnshire, Ross and Cromarty and Sutherland) and Perth and Kinross (Perthshire and Kinross-shire).

Places of Interest:
Strome Castle, Loch Carron, Wester Ross.  Originally built for the earls of Ross, it was made over to the Chief of Glengarry by James V in 1539. Today it is a ruin.

Invergarry Castle, Invergarry. Wester Ross. This is the ruined stronghold of the MacDonells of Glengarry.

Scottish National Portrait Gallery, Edinburgh. There is a magnificent portrait of Alasdair Ranaldson MacDonell of Glengarry , 15th Chief of MacDonell, painted by Sir Henry Raeburn in 1812.