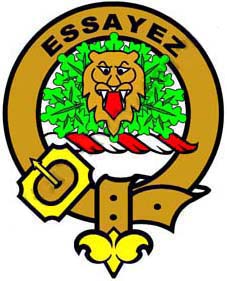 Dundas Crest: A lion's head, affrontée, looking through a bush of oak, Proper.

One Uthred or Huctred, obtained the lands of Dundas from Waldeve, son of Gospatrick, Earl of Dunbar, most probably in the reign of Malcolm IV.  It is generally accepted that he was Waldeve's younger brother. Helias de Dundas, son of Uthred, witnessed a gift to the monks of Dunfermline between 1202 and 1214, and was confirmed in the lands of Dundas and assumed than name and designation, his son Saer de Dundas rendered homage to Edward I in 1296, and his son Sir Hugh de Dundas was a follower of Sir William Wallace. His son, George, was killed at the Battle of Duplin in 1332.

Around 1364, the Barony of Fingask was acquired by John de Dundas, whose son James in 1424, rebuilt and fortified Dundas Castle at South Queensferry. His youngest son Duncan, who was Lord Lyon King of Arms between 1452 and 1471, founded the family of Dundas of Newliston. Other branches of the family were to be found at Blair, Kincavel and Duddingston.

In the 15th century, Sir Archibald Dundas was sent on a series of important missions to England by James III. The island of Inchgarvie in the Firth of Forth was a gift from James IV who granted the Dundases the rights to build a castle there.

Sir James Dundas was Governor of Berwick in the reign of James VI. His son, also James,  who represented Midlothian in the Scottish Parliament, was knighted by Charles I in 1641. Although a loyal subject, he strongly opposed the King's determination to impose the Episcopal religion on Scotland and was one of the first to sign the National Covenant. After the Restoration, he was offered a seat on the Supreme Court and took the judicial title of Lord Arniston.

His eldest son, Robert, also a judge, again took the judicial title of Lord Arniston, and thereafter the family were to provide two generations of lords presidents of the Court of Session. Arniston House in Midlothian remains the home of their descendants.

The statesman Henry Dundas (1742-1811), a younger son, was created 1st Viscount Melville and “managed” Scotland for the Prime Minister William Pitt, becoming known as the “Uncrowned King of Scotland”.  He was also President of the Board of Control for India, and through his influence many Scots found lucrative opportunities in that country. Under his guidance, many of the estates forfeited during the 1745 Jacobite Uprising were reinstated, and the ban on the wearing of tartan was lifted.

The 2nd Viscount Melville was Chancellor of the University of St Andrews from 1814, and from 1801, served as Member of Parliament for Midlothian, and as First Lord of the Admiralty from 1812 to 1827.  The 3rd Viscount was a Captain in the 83rd Regiment, rising to the rank of Colonel, and was appointed Aide-de-Camp to Queen Victoria.

Sir David Dundas (1735-1820) was born in Edinburgh in 1735, and rose through the British Army to become Commander-in-Chief of the British Army in 1809. In 1762, Sir Lawrence Dundas, Vice-Admiral of Shetland and Orkney, was created a baronet. In 1741, his son, Thomas, became Baron Dundas of Aske, and in 1883, his son, another Lawrence, who was Lord Mayor of the City of York, was created 1st Earl of Zetland. The 3rd Earl, his nephew, who   had served as a Lord in Waiting, Member of Parliament for Richmond, and as Lord Lieutenant of Ireland from 1889-92, became Marquesses of Zetland. The 2nd Marquess of Zetland was Secretary of State for India from 1935 until 1937.

Admiral Sir Charles Dundas of Dundas, 28th Chief of the Name, was Aide-de-Camp to George V during the First World War.

Places of Interest:  Arniston House, Gorebridge, Midlothian, was built for the Dundas Family, who had held lands here since 1571.  In 1786, Henry Dundas, 1st Viscount Melville commissioned the architect Henry Playfair to remodel Melville Castle at Gilmerton as his principle place of residence. It is today a hotel and conference centre. His statue by Henry Forrest (1828) stands on a 135ft column in Edinburgh's St Andrews Square. The Royal Bank of Scotland building, also in St Andrew's Square, was built in 1722 and designed by Sir William Chambers as a town house for Sir Lawrence Dundas. It was lost by him in a game of poker.
Dundas Castle, South Queensferry, Midlothian was originally built in 1424  for James Dundas of that Ilk. Inchgarvie Island in the Firth of Forth was garrisoned by the Dundas family in the 15h century for the protection of shipping.

Surname distribution in Scotland: The Dundas surname is most commonly found in the Highland Region (includes the historic counties of Caithness, Inverness-shire, Nairnshire, Ross and Cromarty and Sutherland), Angus (Forfarshire), Dundee City, Glasgow and East and West Dunbartonshire.