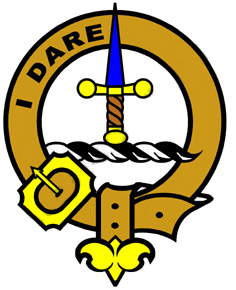 Dalziel Crest: A dagger, erect, proper, pommel and hilt, or

The Barony of Dalzell in Lanarkshire provided this surname, although in Shetland it appears as Yell, derived from the island of that name. A traditional story is that a kinsman of Alexander II was hanged by his enemies, and the King offered a great reward to any person who could rescue the body. A man stepped forward and announced “Dal Zell”, which means “I dare” and, once the mission was accomplished, he was rewarded with lands. As a result, “I Dare” became the Dalyell Family motto. However, the Gaelic translation of “dal-gheail” is “White Meadow”, which is an appropriate description of the Lanarkshire territory.

The surname first appears in mainland Scotland in 1259 when the Baron of Daliel served on an inquest. Hugh de Dalyhel was Sheriff of Lanark in 1288, and Thomas de Dalielle of the County of Lanark rendered homage to Edward I in 1296.  Sir William de Dalziel fought at the Battle of Otterburn in 1388 and lost an eye.

In 1639, Sir Robert Dalzell, Lord of Dalzell, was created Earl of Carnwath, and his son Robert, 2nd Earl, joined the Marquis of Montrose in support of Charles I in the Civil War in Scotland. In 1645, however, he was found guilty of treason and heavily fined. The estates did revert to his son Gavin, but to cover his father's debts, he was obliged to sell Dalzell Castle, the family seat at Motherwell, to his cousin John Hamilton.  The 5th Earl fought for the Jacobite Cause in 1715, as a result of which his remaining lands and title were forfeited.

Thomas Dalyell of the Binns (c1599-1685), son of Thomas Dalzell of Edinburgh and grandson of Robert Dalzell of Dalzell and Elliock, served in the Rochelle Expedition of 1628, and in 1651 was taken prisoner at the Battle of Worcester when serving with the Scottish Army. He escaped to Russia and fought in the war against the Tartars and the Turks, earning the title of the “Muscovy Beast”. In 1666, he was appointed Commander-in-Chief in Scotland and defeated the Covenanting Forces at Rullion Green in the Pentlands. It was he who in 1681 raised the Royal Scots Greys. A devout Royalist, he refused to shave off his beard following the execution of Charles I.

After his death in 1685, his son, also Thomas Dalyell of the Binns, was created a baronet on account of his father's achievements.  The House of the Binns in Midlothian was built by Sir Thomas's father in 1623 although much restructured around 1820. It remains with the family. The last laird was the tenacious Tam Dalyell (1932-2017), who served as a Labour Member of Parliament from 1962 to 2005. He was, in effect, the 11th Baronet, but never used his title. He is succeeded by his son, Gordon Wheatley Dalyell, who becomes the 12th Baronet.

There is an active Dalzell Family Association in North America.

Places of Interest: Rullion Green, Carnethy Hill, beyond Flotterstone Bridge, Midlothian, battle won in 1666 against Covenanters by General Thomas Dalyell. Abercorn Church on Hopetoun Estate, South Queensferry.  Although legend has it that General Thomas's body was taken by the devil, his tomb is in the churchyard here. The House of the Binns, near Linlithgow, dates from 1478. The property is today owned by the National Trust for Scotland and is seasonally open to the public.

Surname distribution in Scotland: The Dalziel surname is most commonly found in the Shetland Islands (Zetland), Glasgow City, Dunbartonshire, Lanarkshire and Dumfries and Galloway (Dumfriesshire, Kirkcudbrightshire and Wigtownshire).