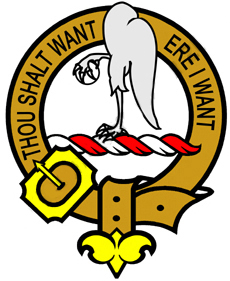 Cranstoun Crest: A crane, (roosting with head under wings), and holding up a stone with dexter foot, all proper.

Originally the surname of Cranstoun or Cranston derived from the old Barony and present Parish of Cranston in Midlothian, the Cran being a location where cranes are found, and "Tun", a large farm.  As such, a crane features on the family crest. The name Elfrick de Cranstoun appears in the 12th century when he witnessed a Charter by William the Lion to the Abbey of Holyrood. The Cranstouns owned lands in Edinburgh and Roxburghshire, and family tombs can be found in Melrose Abbey, although recent generations are buried at Corehouse, on the Falls of Clyde.

One of Elfric's descendants, a Thomas de Cranstoun, was Provost of Edinburgh in 1423, and may be the same man who was appointed ambassador to James IV in 1499.  An Andrew de Cragestone of Edinburghshire rendered homage to Edward I of England in 1296, and William de Cranstoun was made one of the conservatives of the truce between England and Scotland in 1451.

In 1592, Thomas and John Cranston were accused of treason for supporting the 4th Earl of Bothwell.  In 1600, Sir John Cranston became embroiled in the Gowrie Conspiracy to murder James VI.  He was pardoned by the King although his brother, Thomas, was executed.  In 1609, however, Sir John Cranstoun of Morristoun, James VI's Captain of the Guard, was created Lord Cranston.

During the Civil War, the Cranston's sided with the Royalist Cause and in 1561, the 3rd Lord Cranstoun was captured at the Battle of Worcester and imprisoned in the Tower of London. William, 5th Lord Cranstoun was a member of the last Scottish Parliament before the 1707 Union.

James, 8th Lord Cranstoun, commanded HMS Bellerophon during the Napoleonic Wars, and was later appointed Governor of Grenada. With the demise of the 11th Lord in 1813, the peerage became extinct and the Chiefship passed through the female line.

George Cranstoun who was descended from the 5th Lord Cranstoun, became Dean of the Faculty of Advocates and, in 1826, became a judge with the title of Lord Corehouse. This was after his home on the Falls of Clyde where he regularly entertained his friend the novelist Sir Walter Scott. After his death in 1850, Corehouse passed first to his niece Maria, then to his sister Margaret, who both adopted the compound surname Edmonstoune-Cranstoun

In 1950, Colonel Charles Edmonstoune-Cranstoun, laird of Corehouse, died, and the estate passed to his nephew, Lieutenant Colonel Alastair Cranstoun. One of his first moves was to establish his claim to the Name and Arms of Cranstoun. He died in 1990, and was succeeded as Chief by his nephew, David Cranstoun, who continues to live at Corehouse.

The Cranston tartan first appeared in the 1842 Vestiarium Scoticum produce by the Sobieski-Stuart brothers, who claimed to be natural grandchildren of Prince Charles Edward Stuart. This book was subsequently discredited, but the majority of tartans it illustrated remain the more ancient of the ones we know about.

Catherine Cranston (1849-1934) was a patron of the architect/designer Charles Rennie Mackintosh and pioneered the tea room in Glasgow.

Places of Interest: Cranston Parish Church, built 1824, is situated in the policies of Oxenfoord Castle, near Dalkeith, Midlothian. Corehouse, close to New Lanark on the Falls of Clyde, is the seat of David Cranston of that Ilk.

Surname distribution in Scotland: The Cranstoun surname is most commonly found in Dumfries and Galloway (Dumfriesshire, Kirkcudbrightshire and Wigtownshire), The Scottish Borders (Berwickshire, Peeblesshire, Roxburghshire, Selkirkshire and part of Midlothian) and Edinburgh and the Lothians.