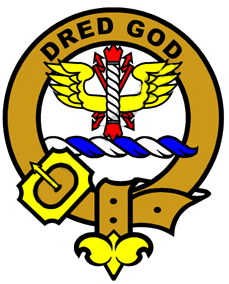 Carnegie Crest: Argent, an eagle displayed Azure, armed, beaked and membered Gules, on it's breast an antique covered cup Or.

In 1358, Walter de Maule made a grant of the lands of "Carryneggy", at Carmyllie, in south-east Angus on John de Ballinhard, who, the transaction having been confirmed by David II, took the name Carnegie of that Ilk. This line expired in 1563. However, the style "of that Ilk", meaning "senior of the Name", was restored by the Carnegies of Kinnaird towards the end of the 16th century.

Duthac de Carnegie, second son of John de Ballinhard, witnessed a deed of sale in Aberdeen in 1383, and from him and his son John de Ballinhard, descend the House of Southesk and the House of Ethie. Duthac was killed at the Battle of Harlaw in 1411. His son, Walter Carnegie of Kinnaird, fought under the standard of James II at the Battle of Brechin in 1452.

In 1513, John Carnegie of Kinnaird died fighting for James IV at the Battle of Flodden. His son, Sir Robert, a member of the College of Justice, was sent to England to negotiate the release of the Earl of Huntly, Chancellor of Scotland, who had been taken prisoner at the Battle of Pinkie in 1547. Sir Robert's son, John, was a loyal supporter of Mary Queen of Scots. He died without children, so the family estates passed to his younger brother Sir David, who, in 1616, was created Lord Carnegie of Kinnaird, then in 1633, Earl of Southesk. In 1662, the earldom of Northesk was assumed by his younger brother John, who in 1647 had been elevated to the peerage as  Earl of Ethie, but preferred the Northesk alternative.

The Carnegies were fervent Jacobite supporters. The 5th Earl of Southesk took part in the 1715 Uprising and was attainted, his estates forfeit to the Crown. Sadly predeceased by his children, the Southesk title passed to Sir James Carnegie of Pittarrow, descended from a younger son of the 1st Earl. In 1885, the attainder was reversed and the titles restored.

In 1923, the 11th Earl of Southesk, when Lord Carnegie, married her Highness Princess Maude, granddaughter of Edward VII. Their son, as well as being heir to his father's earldom, and being Chief of Clan Carnegie, was made Duke of Fife. The Family Seat is Kinnaird Castle at Brechin, in Angus.

The  6th Earl of Northesk (1716-1792) became an Admiral in the Royal Navy; his son, the  7th Earl of Northesk (1758-1831) was third-in-command under Admiral Lord Nelson at the Battle of Trafalgar.  Andrew Carnegie (1835-1918) was the son of a Dunfermline-based linen weaver who emigrated to Pittsburgh, Pennsylvania, USA in 1848. Through working in the iron and steel industry, he became one of the richest men of his generation and gifted over $350million dollars to charitable causes, including the town of Dunfermline.

Places of Interest:  Kinnaird Castle at Brechin in Angus, seat of the earls of Southesk and dukes of Fife. Skibo Castle, Dornoch in Sutherland, dates from the 12th century. In 1898, it was purchased and remodelled by the tycoon Andrew Carnegie. Today, with its 18-hole golf course, it is run as the exclusive members only Carnegie Club.

Surname distribution in Scotland: The Carnegie surname is most commonly found in Angus (Forfarshire), Dundee City, Aberdeenshire and Perth and Kinross (Perthshire and Kinross-shire).