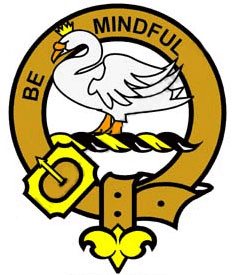 The Campbells acquired the ancient thanedom of Cawdor in 1510 through the marriage of Sir John Campbell to Muriel, the 12-year old Calder heiress, who had been kidnapped by the Campbells as a baby. Despite the implications of this, however, the marriage seems to have worked. When she died, she settled the estate and titles on her grandson John, hence the Campbells of Cawdor.

This Sir John married Mary Keith, a daughter of the powerful Earl Marischal and a younger sister of the wife of the Regent Moray, who, after his assassination, married Colin, 6th Earl of Argyll, Chancellor of Scotland. Following Argyll's death, Sir John was made guardian of the young 7th Earl of Argyll, but was murdered by Campbell of Ardkinglas in 1591 in a conspiracy hatched by his fellow guardians.
In 1625, Campbell of Cawdor purchased Islay and Jura from the Macleans of Duart, the culmination of a long and bitter feud to gain control of the islands. The islands were afterwards sold by  Sir Alexander Campbell of Cawdor, who married Elizabeth, sister and heiress of Sir Gilbert Lort, of Stackpole Court, Pembrokeshire. Thereafter, the family took up residence in Wales, a situation which was compounded when Sir Alexander's son John married the eldest daughter and co-heiress of Lewis Pryse of Gogirthen, Wales.  In 1790, John Campbell was created Lord Cawdor of Castlemartin, in the county of Pembroke. In 1827, his son was created 1st Earl Cawdor. It was the 5th Earl Cawdor, a Lieutenant Colonel in the Cameron Highlanders during the Second World War, who once again made Cawdor Castle his family's principal home. He was Chairman of the Scottish Historic Buildings Council and became a trustee of the National Museum of Antiquities. he died in 1970.

Places of Interest: Cawdor Castle, near Nairn, Nairnshire. Built over a Hawthorn tree c.1454 by William, Thane of Cawdor. Acquired by the Campbells during the Middle Ages, Seat of the earls Cawdor since 1510. Open to the Public.