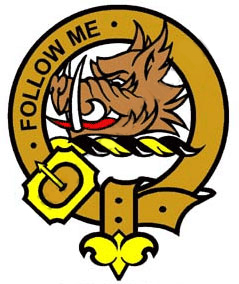 The Campbells of Glenorchy (Breadalbane) descend from Black Colin of Glenorchy, 3rd son of Sir Duncan Campbell of Loch Awe, 1st Lord Campbell, by his wife Lady Marjorie Stewart. With the dispersal of the MacGregors from Glenorchy during the late 15th century, Sir Duncan gifted the lands to Black Colin who, through marriage to the co-heiress of John, Lord of Lorne, also inherited one-third of the lands of Lorne. It was he who built the castle of Kilchurn at the north east end of Loch Awe, to command the gateway to the Western Highlands. By this stage, it was said, the Chief of Glenorchy could travel from the east end of Loch Tay to the coast of Argyll without leaving his own land.

In 1681, John Campbell of Glenorchy, 1st Earl of Breadalbane and Holland, having won favour with William of Orange, was given the responsibility of ensuring that Highland Jacobite chiefs came to terms with King William's invasion, although he is known to have taken a relatively impartial stance. This was totally compromised in 1692 when his cadet clan, Campbell of Glenlyon, implicated him in the massacre of the MacIan Macdonalds on Glencoe.

Kilchurn Castle, Loch Awe, Argyll. built by Sir Colin Campbell of Glenorchy in 1440, although tradition has it that it was built by his wife, Sir Colin having been away on a Crusade at the time.

Taymouth Castle, Kenmore, Perthshire.  A castle was built here by Colin Campbell of Glenorchy in 1550 on the site of what had been Balloch Castle. In 1842, Queen Victoria and her Consort, Prince Albert, were guests here of the Marquess of Breadalbane. The Taymouth Estate was broken up after the First World War. Although currently unoccupied, the castle is looked after by a full-time caretaker.

Finlarig Castle, near Killin, Perthshire. This was the 16th century seat of the Campbells of Glenorchy.  The Scottish Parliament was summoned to meet here in 1651, but only three members turned up. Beside the castle stand the remnants of the Breadalbane Mausoleum, a Tudor chapel erected in 1829.