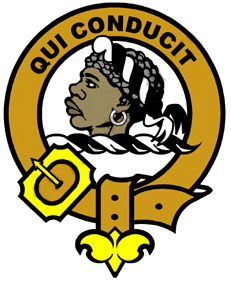 Since the Athelings represented the ancient Saxon Royal Family, and were connected with the rulers of Hungary, it is thought that Andreas was of Hungarian descent. However, the surname has a territorial origin, originating from the Borthwick Water in Roxburghshire. The Borthwick family is one of the oldest on record in Scotland and has consistently played a prominent role in national affairs.

The first Lord Borthwick was sent to England in 1425 as a hostage for the return of  James I. It was he who built Borthwick Castle, near Middleton in Midlothian, and this formidable fortress is today leased from his descendants and run as a hotel and wedding venue.

The early sequence of the lords Borthwick is confusing in that for six generations they shared the same Christian name of William. The 3rd Lord Borthwick is said to have fought and died at the Battle of Flodden in 1513. The 4th Lord Borthwick, a close confidant of Queen Mary de Guise,  was appointed a guardian of the infant James V and given the command of Stirling Castle.   The 5th Lord Borthwick was a loyal supporter of Mary, Queen of Scots, and it was at Borthwick Castle that she and her third husband, James Hepburn, 4th Earl of Bothwell, took refuge after their marriage, but were forced to flee when Mary's half-brother, the Earl of Moray arrived with a large force.

The Borthwicks supported the Royalist Cause during the Civil War, and Borthwick Castle was besieged following the Battle of Dunbar in 1650. The castle was spared when Oliver Cromwell negotiated its surrender. The 9th Lord Borthwick died in 1675, and thereafter, the direct line came to an abrupt halt, and was only revived a century later when Henry Borthwick of Neathorn was recognised by the House of Lords as a direct descendant of the first Lord Borthwick. However, he died without issue, and for eight generations over two centuries, the title was disputed by various branches of the Borthwick family despite it being reinstated for the 14th Lord Borthwick, in 1762, and for the 19th Lord Borthwick, in 1870,

In 1986, Major John Henry Stuart Borthwick of Crookston, Midlothian, was recognised as 23rd Lord Borthwick by the Court of the Lord Lyon King of Arms. The last holder of the de jure 15th
Century title died in 1910, and it was only in the late 1940s when Vatican records concerning Scotland became available and Scottish records were more comprehensively catalogued, that Major Borthwick was able to establish his claim. The Chiefship is today held by his son John, 24th Lord Borthwick.

James IV's Master Gunner was Robert Borthwick who built seven great canons called the "Seven Sisters". They were put to use at the Battle of Flodden in 1513, but as history relates the guns were facing in the opposite direction from the English attack. Sir John Borthwick (d.1560) was condemned to death for heresy and, having fled to England, was burned in effigy. He served Henry VIII of England on various missions and returned to Scotland in 1561 when his sentence was revoked. David Borthwick of Lochhill was Lord Advocate of Scotland in the reign of James VI. Kenneth Borthwick was Lord Provost of Edinburgh from 1977 to 1980.

Surname distribution: The Borthwick surname is most commonly found in The Scottish Borders (Berwickshire, Peeblesshire, Roxburghshire, Selkirkshire and part of Midlothian), Edinburgh and the Lothians, and Dumfries and Galloway (Dumfriesshire, Kirkcudbrightshire and Wigtownshire).