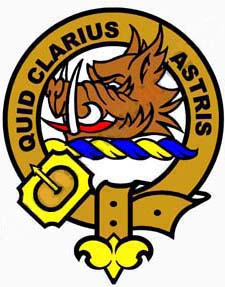 Baillie Clan Motto: Quid Clarius Astris (What is brighter than the stars?).

Baillie Clan History: There are those who assert that the surname originates from Balliol, that of the deposed king of Scots, but this is incorrect. Regardless of the "de" attached in early records, it is certainly derived from the position of bailie or bailiff. The first recorded use in Scotland occurs in 1311 when a William de Baillie is listed as a juror in a trial over forfeited land in the Lothians. William Baillie of Hoprig was knighted by David II in 1357 and, in 1368, was given a Charter for lands at Lamington.

There are a number of other prominent families sharing the name and these include the Baillies of Carphin. Polkemmet, Provan, Jerviswood, Dunrogal and Dochfour. The Baillies of Dunain are said to have been founded by a younger son of the house of Lamington who fought at the Battle of Brechin in 1452 and was rewarded with lands by the Earl of Huntly.  He was also made Constable of Inverness Castle.

Sir William of Lamington married Janet, daughter of James, Earl of Arran and Duke of Chatelherault and was appointed Master of the Wardrobe to Mary de Guise. He fought on the side of Mary Queen of Scots at the Battle of Langside in 1568, and, as a result, his estates became forfeit.

In the early 12th century, 5,000 acres covering much of what is now the north eastern part of Glasgow were granted to the Church by David I in support of the Prebendary of Barlanark. Four centuries later, William Baillie was appointed to the post of Prebendary and, as was often the case in the decades before the Reformation took place in Scotland, the distinction between church ownership and private ownership became increasingly vague. When the Reformation arrived in 1560, the post of Prebendary had already been passed down through several generations of the Baillie family and, in 1562, Sir William Baillie, Lord President of the Court of Session, formally took over the Barlanark estate.

Before 1719, Charles Hamilton, Lord Binning, heir to the 6th Earl of Haddington, married Rachel Baillie, daughter and heiress of George Baillie of Jerviswoods and Mellerstain. Their descendants thereafter assumed the additional surname of Baillie.

In 1894,  Colonel James Baillie, Member of Parliament for Inverness, married Nellie Lisa Bass, daughter of the wealthy Victorian industrialist Lord Burton. As there was no male heir, this title thereafter came into the family of the Baillies of Dochfour.

Sir William Baillie of Provand was called to the Scottish Bench in 1566 with the judicial title of Lord Provand. He was Lord President of the Court of Session between 1566 and 1593.
Robert Baillie (1599-1662) was born in Glasgow, and took Episcopal ordination. In 1637, he refused to preach in favour of Archbishop Laud's service book. He was subsequently appointed joint-Professor of Divinity at Glasgow University and, in 1649, was sent to Holland on behalf of the Church of Scotland to invite Charles II to accept the Covenant and Crown of Scotland. After the Restoration, he was appointed Principal of Glasgow University.

General William Baillie of Letham, natural son of Sir William Baillie of Lamington, commanded a regiment of Dutch Infantry for Gustavus Adolphus before returning to Scotland in 1638 to support the Covenanters. He served under Alexander, Earl of Leven, and when Scotland joined the English Civil War, he commanded two Scottish brigades on the right of the Parliamentary front line. In 1645, his army was utterly destroyed at the Battle of Alford by the Marquis of Montrose

Robert Baillie of Jerviswood (1634-84) plotted against Charles II in the Rye House Plot and was caught and executed. Grizel Baillie (1665-1746), was the daughter of Sir Patrick Home, and married Robert Baillie of Jerviswood's son George.  When her father was imprisoned for his Protestant principles and then escaped, she sheltered him in Polwarth Church. She accompanied him to Holland where he became an advisor to William of Orange. On his return to Scotland, he was appointed Lord Chancellor to William and Mary.  Matthew Baillie (1761-1823), born at Shotts Manse, was an anatomist and physician. In 1793, he was author of the first treatise in English on Morbid Anatomy.  His sister. Joanna Baillie (1762-1851, poetess and playwright, was born in Bothwell Manse. Her tragedy De Montfort was produced at Drury Lane Theatre in 1800.

Places of Interest: Baillieston, situated on the north side of the River Clyde in the East End of Glasgow, was part of the old Bishopric of Glasgow. Dochfour House, on the banks of Loch Ness, has been owned by the Baillies for over five centuries. Dunragit House, Dunragit, nr. Glenluce, Galloway. Mansion house which incorporates a 16th-century tower. Home of Cuthbert Bailey, Commendator of Glenluce Abbey and Lord High Treasurer of Scotland, from the early 1500's. The property remained in the family for two centuries. Howden House, Jerviswood House, nr. Lanark, overlooking the Mouse Water. Owned the Bailies in the early 1600's. Mellerstain House, north west of Kelso, Borders. Stately home built on lands held by the Baillie family, earls of Haddington, from 1642 until 1987.

Name distribution in Scotland: The Baillie surname is most commonly found in Edinburgh & The Lothians, Lanarkshire and Ayrshire.