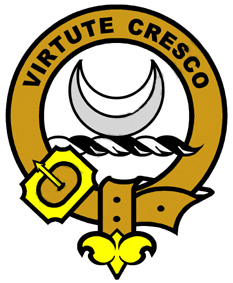 Leask Clan History: The surname is said to originate from the lands of Leask, now Pitlurg, in the Parish of Slains, Aberdeenshire.  Another theory that has been advanced is that it comes from Liscus, Chief of the Haedui, a tribe of Gauls. There is also a possible Norman provenance from the Castle of Boulogne which at one time belonged to a family called de Lesque.

In 1296, Willam de Laskereske rendered homage to Edward I of England. Between 1341 and 1346, a replacement Charter for the Leask Lands of Leskgoroune was granted to William Lesk by David II.

In 1380, William of Lask, Lord of that Ilk, granted a pound of wax annually to the Church of St Mary at Ellon. In the mid-15th century, James Lask, son of Thomas de Lask of that Ilk went to Orkney at the invitation of Prince Henry St Clair, Earl of Orkney, and appears to have settled there, some of the family later moving to Shetland.

Alexander, his younger son, his elder brother having pre-deceased his father, moved to live on Orkney, and Alexander's sons descend the Leask families of Canada, Australia, New Zealand and the USA. Captain William Leask (1851-1902) was an Orcadian sea captain and said to have rounded Cape Horn on forty-two occasions.

In 1962, a portion of the family lands in Aberdeenshire was bought back, and the Leask Society was established with the support of prominent family members such as Lieutenant General Sir Henry Leask (1913- 2004), Governor of Edinburgh Castle and General Officer Commanding the British Army in Scotland.

Another distinguished family member was Air Vice-Marshall Kenneth Leask. Born at Birsay on Orkney in 1996, he served as Director General of Engineering at the Air Ministry between 1947 and 1949.

Surname distribution in Scotland: The Leask name is most commonly found in the Shetland Islands (Zetland).

Places of Interest: Slains in Aberdeenshire. Pitlurg, which originally comprised the lands of Leask, is situated north east of Ellon.